Collaborative robots and the factory of the future

What does the factory of the future look like?

The world of manufacturing is arguably experiencing the effects of a fourth revolution typified by industrial robots. The first 3 revolutions transformed our society through the steam engine, the age of science and the rise of digital technology1. Each revolution is characterized by the mechanization of manufacturing and a revolution in power.

Although the age of technology and the growth of industrial robots is quite similar, what sets industrial robots apart is their use of artificial intelligence to perform tasks with a high degree of independence. Meaning humans and robots can now work alongside each other in cohesion improving a company’s competitiveness in the areas of reliability, production time and customer satisfaction.

In recent years, people have begun imagining a future dominated by technology. The process of manufacturing is not exempt from this. As technology continues to improve questions of what the factory of the future will look like arise.

“The future of production will be smarter, more flexible and closer to the customer”

According to ABB, “The future of production will be smarter, more flexible and closer to the customer” 2. This was a statement made after the German Chancellor, Angela Merkel and the Swedish Prime Minister, Stefan Löfven visited ABB’s factory in Germany which they have entitled “The Factory of the Future”2.

How can you increase your productivity and reliability rate?

ABB’s low voltage factory in Beijing has over 27 autonomous robots working alongside humans and has implemented automation and traceability technologies throughout parts of the manufacturing, assembly and logistical portion of the production process3. As a result of these technological improvements ABB has experienced a reliability rate of 99.94%, a decrease in lead times from 8 to 2 days and an overall productivity increase by 6%3.

The results experienced by ABB's implementation of industrial robots are the dream of most manufacturers. Who wouldn’t want an increased productivity and reliability rate?

In 2019, production facilities cannot afford to be bogged down by low production rates that are attributed to human error, disorganization and slow processing. Instead, facilities should be looking for ways to automate their facility using industrial robots so as to reflect the “Factory of the Future” as created by ABB. 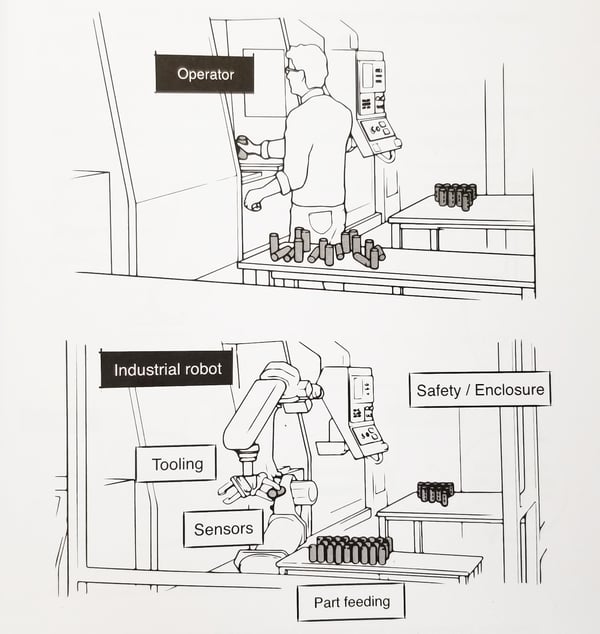 Image taken from the book "The Lean Robotics Book: A Guide To Making Robots Work In Your Factory" 4. Displaying a global view of a manual and a robotic cell.

The marked shift of collaborative robots in factories signals a change in the way we think about manufacturing setups and our expectations as a result of these production changes. The use of collaborative robots in your facility is a relatively straightforward solution to any number of the challenges listed above. Step into the future of manufacturing and allow us to help automate your facility!

Industrial robots are intended to be used within a factory for the purpose of taking over dull, dangerous, difficult and dirty work. They are meant to fill in where humans cannot be found for the job or where it is simply too dangerous to continue to employ people in those manufacturing positions.

The use of the word “replace” can become alarming to people who currently occupy these jobs as they see robots as an indicator of looming unemployment. However, one of the great things about implementing a collaborative robot is the return on investment manufacturer’s experience. By implementing a robot it frees up a greater number of resources for manufacturer’s to reinvest in other areas of their business. Allowing a manufacturer to relocate the employees they previously had in dull and dangerous work to a position that is much safer and guarantees greater fulfillment.

4. The Lean Robotics Book: A Guide To Making Robots Work In Your Factory, by author Samuel Bouchard, CEO of Robotiq, products proudly distributed by Proax Technologies in all of Canada. https://leanrobotics.org/