Posted by Proax Technologies on September 03 2020

Before diving deep into air dryers, it's important to understand the components involved in an industrial air system. Air dryers are one of many elements that comprise the installation even before providing key airflow to your numerous machines. An air compressor draws in the atmosphere from its surroundings and compresses the air which passes through an aftercooler before being stored in the tank, where the compressed air is stored will be contained until needed. The pressurized air travel through a "mainline filter" into an air dryer 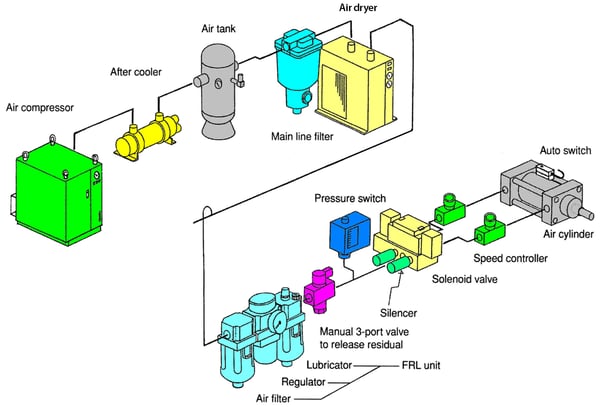 Above: Air System Components Diagram of Compressed Air Provided to a Pneumatic Cylinder

The same way you do not want dust, dirt, oil or other harmful particles your machines, you do not want water in your air system. But how is this water created in the first place? As a large quantity of air is "pressed" together, some water vapor contained in that air is swooped inside the air tank or reservoir. During this process, heat is generated and relative humidity level increases dramatically, enough to reach 100%. It's when the compressed air cools down that water vapor turns into liquid, tiny water droplets. That's condensation, remember your physics class? Note that using an after cooler between the air compressor and the air tank will reduce both the heat and the humidity. But depending on the application, machines, and/or air tools used at the end of the line, putting in place preventive barriers and fail-safes will pay big money and save you a precious amount of time.

Above: What is Air? Pie Chart

The danger is when you're not using the proper air dryer setup. You're sending these tiny water droplets downstream into the airline, this can lead to a build-up that will eventually cause rust, lubricant leaking and even freezing if the piece of equipment is exposed to low temperature. If the ports get clogged, that means the airflow is unstable and some parts of the airline will have to work harder in order to provide the same efficiency. For example, if an air cylinder needs to push something and the air pressure is too low, it will be impossible for the cylinder to do its job, and increasing the air demand will only put more strain on the global airline. Putting some key components at risk.

Air dryers come in many shapes and forms, although there's a broad variety of dryers, the two most common types are refrigerant and regenerative desiccant. We'll go in detail through these two types but also the other ones.